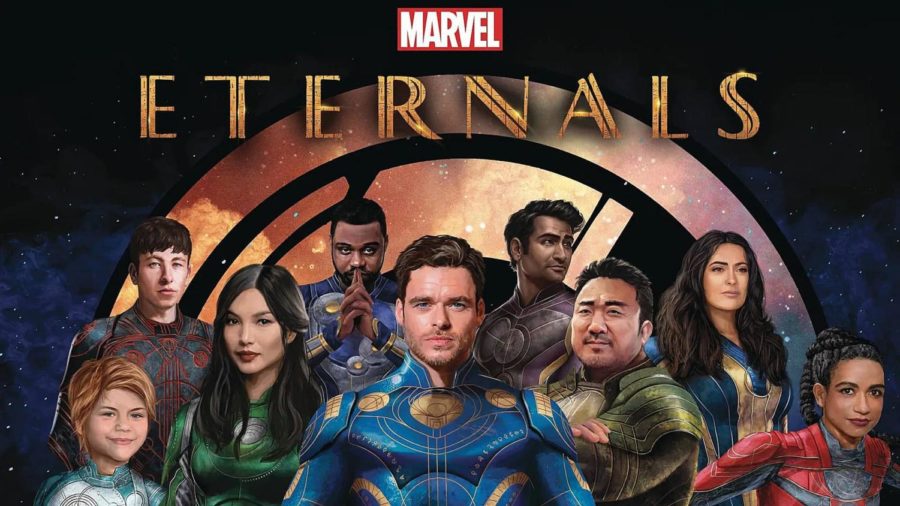 “Eternals” is the newest edition to the Marvel Cinematic Universe and said to change the franchise forever by kicking off Phase Four. For such a pivotal point in the progression of Marvel movies, it is an overall disappointment according to the popular review site Rotten Tomatoes. Despite valid criticisms, “Eternals” should be rewarded for taking risks by steering away from the superhero movie formula that Disney has been relying on too heavily.

In the film, immortal beings, created by a celestial, protect the human race from Deviant monsters that threatened humanity in ancient times. Since then, these immortal beings, known as Eternals have been taking a backseat because they’ve been instructed not to interfere with any human catastrophes in order to allow for natural evolution. Deviants resurface and force the group to reconnect after thousands of years of waiting.

See what your classmates think of “Eternals.”

There were too many characters to fully develop any of them. Movies like the “Avengers,” follow other origin films, so viewers aren’t going in blind and likely are  familiar with characters such as Hawkeye and Nick Furry. Eternals comics are more obscure, so there is not enough time in two and a half hours to introduce so many superheroes. “Eternals” may have done better as a stand alone film or franchise where more time could be spent on exploring this comic series instead of forcing it to relate directly to the Avengers.

“Eternals” is more inclusive than past Marvel content.  Phastos is an openly gay character who is significant to the plot. It seems like Disney would have done more to include an explicitly queer character before now, but up until this point, there has been little to no LGBTQ+ representation. Loki’s bisexuality and gender fluidity is hinted at and Valkyrie’s queerness is implied, but nothing has been portrayed on screen before.

“Eternals” fulfills the stereotypes that it should avoid, especially considering that the film is meant to be progressive. The love triangle romantic trope leads two leading characters to focus on a man as a major plot point. It has been done before and feels familiar in the worst way. The character Sprite’s motivations revolve around a man. The character arc is not poorly written, but traditional roles should be avoided because of how overdone they are in the film industry.

Taken as a whole, “Eternals” is a dull movie that could have been different and engaging at the same time. Instead, it falls short when it comes to entertainment value. It tackles powerful concepts relating to the universe and the value of humanity. It is commendable that the MCU is diving into more intellectual ideas, but it feels like they’re still holding back and retreating to the formulaic superhero movie style. Let’s hope the lack of success for “Eternals” at the box office will not discourage Marvel from stepping outside its comfort zone. To keep the Marvel franchise strong, creators must continue to take more risks like this that bring something new to the table.