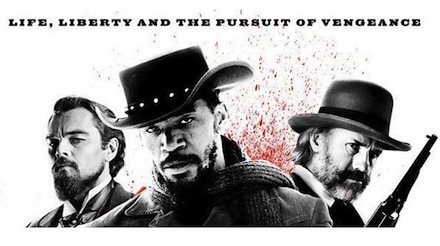 Quentin Tarantino has proven himself over and over again as one of the great American filmmakers, and his latest film “Django Unchained” proves the man is still full of fresh ideas. He is a sponge that absorbs what made other directors great and transforms those influences into his own unique style. His latest movie is no different, paying homage and even poking fun at the old “Spaghetti Western” flicks like “The Good, The Bad, and The Ugly” by exaggerating their style of filming and storytelling. Tarantino decides to put his own twist on this by centering the story around the slavery in the American pre-Civil War period. Watching “Django” was the most fun I’ve had at the movies in a long time.

The film’s subject matter was bound to cause controversy, taking liberties as it does with it’s portrayal of U.S slavery is bound to incite outrage. These complaints are understandable as it is a sensitive subject matter and a very dark aspect of America’s history, but after seeing the film for myself I can’t really understand these criticisms. There is nothing racist about this movie in the sense that the black characters are portrayed as inferior, but on the contrary it’s often the bigoted southerners who are the biggest fools.

Django (Jamie Foxx), a slave being taken to an auction house, partners up with Dr. King Schultz (Christopher Waltz) after killing his masters and setting him free. The doctor is a bounty hunter and eventually makes an agreement with Django to help him rescue his wife after they make it through the winter. Django’s wife belongs to Calvin Caddie (Leonardo Dicaprio), the owner of the fourth largest plantation in the entire south. Django makes for an incredibly strong character who at first I was skeptical about considering Jamie Foxx had never impressed me, but his role in this film is phenomenal. The cast was perfect and every character takes on a unique and interesting personality, a strong characteristic of a Tarantino movie.

Where “Django Unchained” truly shines is it’s clever dialogue and witty banter. I found myself thoroughly enjoying almost every little conversation that took place. In fact, I would probably have been satisfied just reading the script. All of the actors do a spectacular job delivering their lines and all the interactions were very believeable. In addition, the little ways the camerawork pays homage to old Westerns with awkward and speedy close-ups coupled with the cowboy aesthetic turn this period piece into something much more.

Violence has always been part of Tarantino’s style, and “Django” takes it to the extreme. While off-putting for some, I personally found it exciting and humorously cartoonish, fitting the overall tone of the film. There is a high body count and blood covering the walls, all done in spectacular action scenes.

I strongly recommend this movie if you are not bothered by hyper-violence. The characters, writing, and direction all come together into what was one of the best movies of 2012. Tarantino has always ranked as one of my favorite directors, so it  pleases me he doesn’t disappoint with “Django.” The “D” in the film’s title may be silent, but my praise for this terrific movie certainly isn’t.