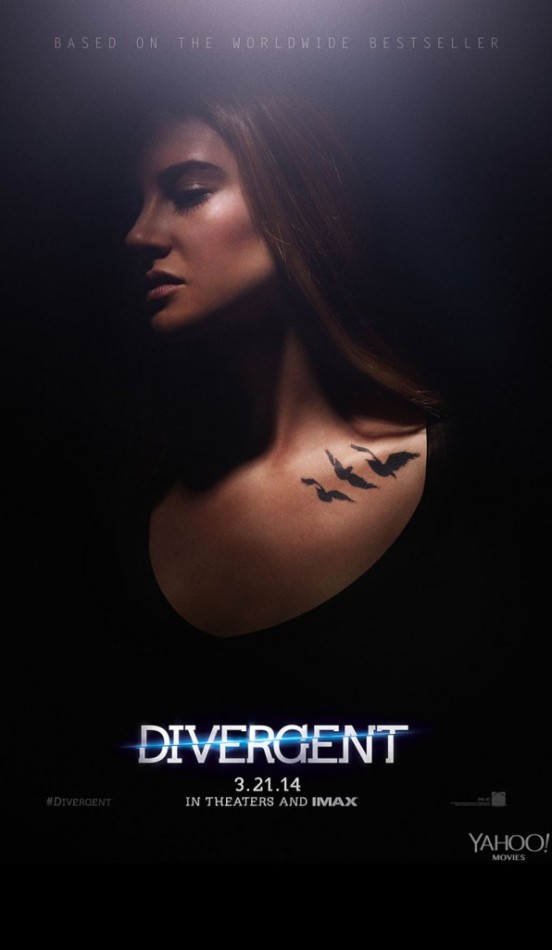 Following the success of “The Hunger Games,” Teen Sci-Fi seems to be the trendiest genre of the moment. Other books similar to the popular series are hoping to capitalize on its success with the formula of a strong female lead set in a dystopian society where she is somehow the “chosen one.” This is pretty vague so the formula sets up a premise but there’s a lot of places it can go from there. The direction “Divergent” takes is that society has been divided up into five factions, each that specialize themselves in an area of expertise. At a certain age the children in the society are to take an aptitude test that will place them into a faction. Our main character, simply named Tris (Shailene Woodley) describes the purpose of each faction: Erudites are the smart ones, Amities are the nice ones, Candors are the honest ones, and Dauntless are the fearless ones. Tris was born into an Abnegation family who are basically the charity faction that provides for those who are “factionless,” the ones who do not fit into a faction, so are are outcasts in society.

There is an internal conflict in the society because the current government, run by Abnegation, is viewed as too altruistic by the Erudites who want to take over things and run them with logic. They are blamed for the dwindling supplies, but all of this is going on behind the scenes while we see Tris and her brother, Caleb (Ansel Elgort), take the aptitude test that will suggest their faction. I say suggest because the children are given free will in their decision of which faction they go to, but it is strongly encouraged to go with the one the test places you in. So Tris takes her test where she is placed into some sort of dream state and subjected to different scenarios to see what she does, and somehow these decisions are supposed determine her faction. Everything goes fairly normal but when she wakes up the test administrator tells her that the test couldn’t place her in a faction making her “Divergent” and she must sneak out through the back door and tell no one.

Tris decides to join Dauntless and her brother becomes an Erudite, and Tris goes on to live her childhood dream of running with the fearless. She meets Christina (Zoe Kravitz), another faction defector who becomes her close friend, and Four (Theo James), a hardened veteran Dauntless who is cold and mysterious with a dark past, which makes him a prime candidate for Tris’s love interest. An internal competition within Dauntless occurs which will kick out a third of the new recruits to become factionless, and Tris ends up losing this but for the sake of convenience they still let her join because of her fearlessness. It turns out the Erudites are injecting everyone with some mid control serum that they will then use to kill all of the Abnegation. The serum doesn’t work on Divergents so Tris is now in a lot of trouble, because the Erudite solution to this is to kill all Divergents.

This is where I developed some serious issues with the film. By the time this conflict amounts to anything I felt like I had been watching drawn out exposition for the first two or so hours so there wasn’t much time for things to go anywhere and the pacing was way off for the remainder. I still had a lot of burning questions that simply weren’t getting addressed like why the serum doesn’t work on Divergents if your faction is pretty much determined by your personality? Why is Tris Divergent? How did her test at all indicate she was Divergent? Are the factionless supposed to be Divergents, or just failed Dauntless members? Unfortunately these questions stayed with me as the credits began to roll, and the typical response seems to be that “the book explains it” which makes these filmmakers seem rather negligent for leaving out details that are pretty crucial to the story.

Everything felt very underwhelming in this film, there were no great action set pieces, the acting felt stiff, and the writing was dull and really underutilized it’s setting. The movie begins in an overgrown decrepit Chicago which could have made for a rather unique scenario in which the factions have to make use of what they can from the district they are limited too. Wouldn’t it make sense for the fearless Dauntless to set up camp in a skyscraper or train the new recruits in the city where they will get some actual field experience. Instead the script decided the best place for this sort of fearless training is inside a cave. I was also left to wonder who this film was made for, because it’s premise is so unbelievably simplistic that it would give the impression that it was made for a younger preteen crowd looking for a positive female role model, but at the same time it deals with suicide, domestic violence, and sexual abuse which just left me scratching my head at such a drastic change in demographic.

“Divergent” is a dull and uninteresting take on dystopian societies, and feels like nothing more than a cash grab riding the coattails of “The Hunger Games,” whose first movie was mediocre at best but still did a better job at making an engaging Science Fiction world for young adults. Considering there is still two more books in this series I can imagine that they will continue this franchise, and if this shoddy adaptation of the book is any indication of more to come, then I can safely this is one franchise I won’t be eagerly awaiting.