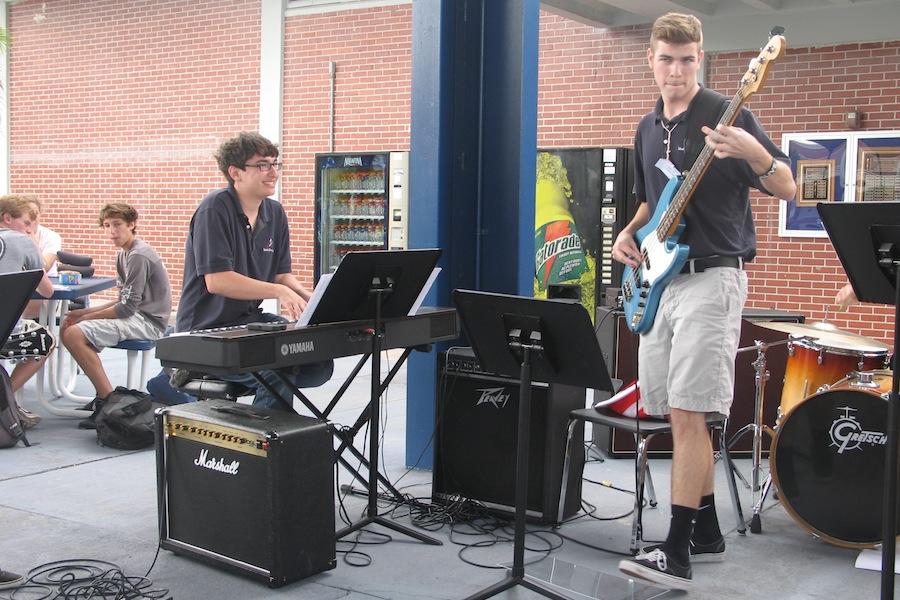 During a lunchtime performance, senior Daniel Tenbusch directs the jazz band, including senior Patrick Furino. Tenbusch will conduct the pit orchestra for 'Brigadoon.'

Next week marks opening night for the high school musical, Brigadoon. Show dates are Friday Feb. 28 at 7 p.m., Saturday March 1 at 7 p.m., and Sunday March 2 at 2 p.m. in the auditorium. Tickets can be purchased online at www.showtix4u.com. This year the orchestra pit will be conducted by senior Daniel Tenbusch.

“I have been doing pit orchestra since ninth-grade and have always wanted to be the student music director since I realized it was a thing,” Tenbusch said. “I was super excited to even get to be a part of pit even in seventh-grade when I heard ‘The Music Man’ pit, so when [Band director Carol Allen] announced it was coming up and they were looking for interested musicians I asked Mrs. Allen immediately and she gave me a chance since there weren’t any particularly interested bassoonists at the time.”

During the after school rehearsals, the musicians work on the different pieces of music to prepare for the show.

“We try to practice the ensemble and solo sung song and dances mostly, and every once and a while a lead will come by and sing their solo with us so we can get a feel for how they are going to sing the song; where they will pause, slow down, speed up,” Tenbusch said. “A lot of times we will read through a song once and maybe twice then move on to the next, it’s 200 pages of music so you can’t really put a lot of time into every song.”

Tenbusch explained some challenges with being a student conductor, including the difficulty of scheduling rehearsals that don’t conflict with too many extracurricular activities.

“I am not nearly as experienced as Mrs. Allen and [Orchestra director Maureen Fallon] in directing a group, so more than a few times I have given a bad cue, wrong time change, conducted at a tempo too fast for our group to sight read, but that is pretty normal I think and I am learning more as the musical comes closer,” Tenbusch said. “Also, I am not just conducting but also in charge of the group, so I am responsible for making sure everybody pays their cast fee, and knows when the practice and show times are.”

Band director Carol Allen is not involved with the pit this year due to upcoming band MPAs, but still knows what student conductors face.

“It’s really hard,” Allen said. “They have to learn how to direct kids though a lot of music, and there’s a lot of stops and starts, a lot of tempo changes, you have to follow what the singers are doing, and be aware of what’s going on onstage. I’m impressed that a student can actually do it.”

Even though the task is difficult, Tenbusch remains enthusiastic about the performance.

“I think we will do great,” Tenbusch said. “I have been in a lot of pits and have seen it come together perfectly plenty of times, and our pit group has been doing very well at practices and in working with vocalists in my opinion. I think we are on track to put on a great show, I’m excited. It is just amazing to have the opportunity to direct a group and watch it all come together.”