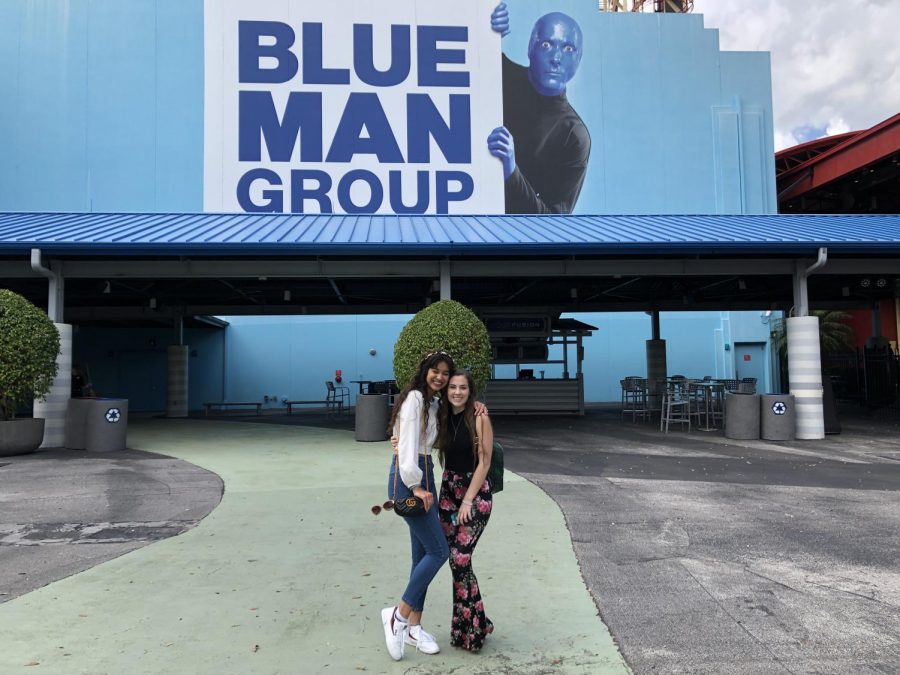 While most students were copying notes, studying or completing class assignments last Tuesday, high school thespians had the opportunity to harness their creative side of learning by seeing the Blue Man Group perform live at Universal Studios Orlando.

The Blue Man Group is a worldwide stage production featuring the musical and artistic talent of odd, silent men dressed in black with bald heads and skin painted completely blue. Since 1987 the Blue Man Group has showcased its humorous and whimsical talent on stages across the globe. In 2012 Universal established its very own Blue Man Group stage show for visitors to attend, and it has been attracting audience members ever since.

“It’s like a trio of curious men who have experimented with a bunch of different instruments and want to show it to the world,” freshman Michael Havkin said. “They have activities and they pick random people from the audience to come on stage. They do a bunch of skits. It’s a lot of fun and they make people laugh.”

This was Havkin’s third time seeing the Blue Man Group live. He saw them perform in 2011 and again in 2014. Havkin said he was not disappointed by the trip.

“It does take some time away from school work,” he said. “But to be away from school for a little while and to relax with your friends is pretty fun. [Theater students] were able to kind of have family bonding. It was a good trip.”

Students who attended the field trip departed from campus on a bus or a van Tuesday morning, and left Universal around 6:45 p.m. Each ticket cost $50 and when the show ended at 1:35 p.m. the students were allowed to tour City Walk with their friends until it was time to drive back to school.

“We just went through security and as a group we all went to the Blue Man Group and enjoyed ourselves,” Havkin said.

“Being able to go and see this group perform with my best friend Gracie and my other friends around me was really fun,” Norton said. “Afterward we got to talk to one of the Blue Men because we did a Q&A. He sat right in front of me. As a group, we talked to him and he said how he was a musical theater major in college at Boston University, and so he gave us a lot of useful information about musical theater. It was really good insight.”

The member of the Blue Man Group the students talked to is West Shore alumnus who performed in countless theater productions during his high school career. According to Havkin, some of the shows that the alumnus had participated in during high school are being performed by this current generation of students, connecting thespians past and present to the same high school stage.

“I’m still undecided as to what I want to go to college for,” Norton said. “So [the Q&A] kind of gave me a little insight as to what I might want to do in musical theater or ministry. I’m always caught between the two.”

Like all theater-related field trips, this trip was organized by Theater Director Maureen Fallon. About 15 students attended the trip as an opportunity to witness the talents of the Blue Man Group first-hand, and to learn from the artistic creation and path of its performers.

“I feel like this acting group has come so far this past year,” Havkin said. “I feel that we are all going to grow as a big group and a family, and get to know each other even better by doing these types of field trips.”