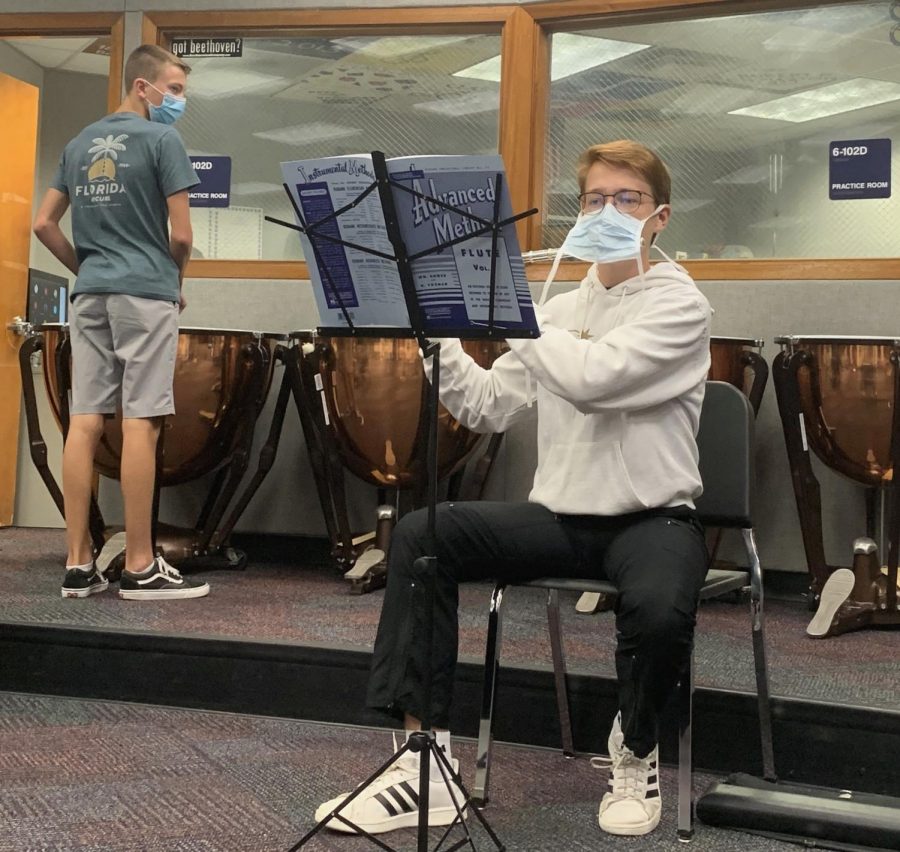 “One of the things we’re doing is ensuring each instrument has a sort of instrument mask,” band director Christopher Houze said. “A kind of cloth covering on the end because we can’t necessarily have a mask on while we play. We do have sort of modified masks that allow us to leave them on while we play. That decreases the risk of spreading the virus, without hurting our sound at all.”

Protocols have been put in place for eLearner band students as well.

“We’ve been using this app that allows students to record their part from home and layer it with other students’ parts, so they still have an opportunity to perform for the class and be a part of the band,” Houze said. “It’s not the exact same, but it’s the best we’ve been able to do. After they perform, the band plays for the online kids as well. It’s been interesting to see how that works.”

“Things have been more geared towards, for example, reading music and writing music instead of playing,” sophomore Grant Newcombe said. “It’s more like music theory, which is super-different. I enjoy that kind of stuff, but I know some people are really not a fan. It’s different, and definitely harder for most people. I think it’ll make for a more experienced band in the long run, but right now it’s just kind of off.”

Students attending in-person classes are allowed to play for 30 minutes at a time before they must leave the room for 15 minutes, allowing the air to circulate. Students also must play in smaller ensembles as opposed to the traditional large groups.

“I think that the smaller groups are really going to affect our blend,” Newcombe said. “I play the flute, so I’ll probably go the entire year without playing with, say, a tuba. The sectioning off has been a lot more strict, I’ll probably only be playing with the woodwind section. That’s a problem because it means we’ll be out of practice playing with a larger group, and we’ll sound less cohesive overall.”

Newcombe also worries about the quality of the band’s performances.

“One weird thing is how there’s so fewer people this year playing at a time, so the focus is really on you,” he said. “Before, if you messed up, you could kind of hide it and blend in, but in the smaller groups when you make a mistake everyone can hear it. There’s no avoiding it anymore.”

Additionally, block scheduling also presents an issue for some students.

“I’ve only been playing for a year, and I don’t have band this semester,” Laith Z. (8) said. “I’m not as experienced as some other people, so I’m really worried about how I’ll do when I get back into class. I rent my instrument from the school, so I can’t really practice until then, so by the time I get back I’m worried I will have forgotten, like, everything I learned last year. It’s really scary.”

“I think this year is going to be really interesting. It’s sort of a grand experiment, since we’ve been working with so many people from home or who have never played an instrument before,” he said. “There’s a greater focus on individuals instead of the band as a whole, which is new. I think that’s really going to strengthen their knowledge and create a really strong and unified group in the future. I’m looking forward to seeing how this works out.”