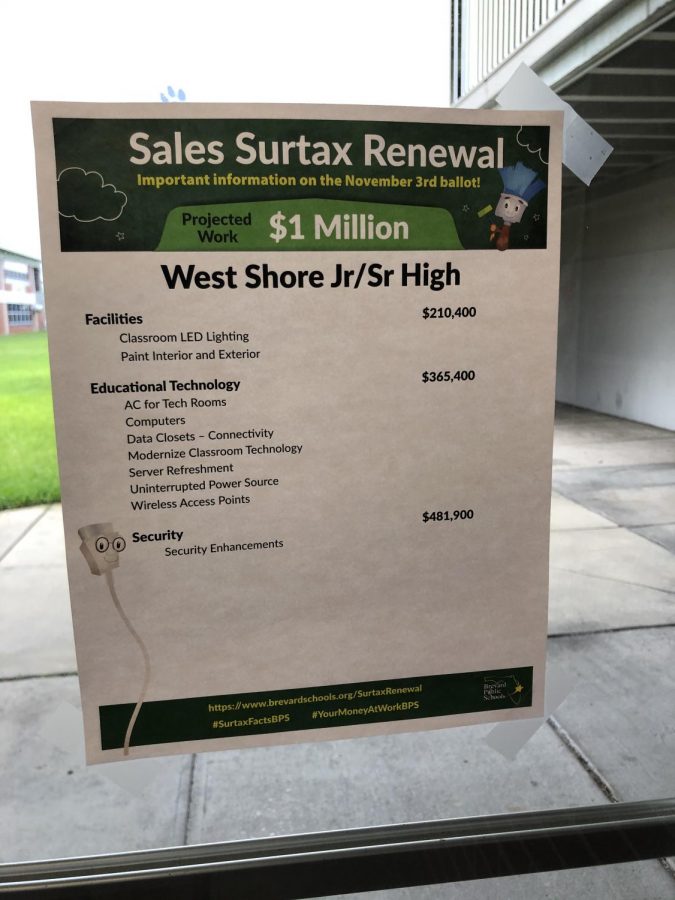 After six years of providing additional funding for school maintenance and repairs, residents will be asked to renew a surtax benefiting Brevard Public Schools when they vote on Nov. 3.

“There are 84 schools in Brevard County, and many of them are older than your parents, possibly your grandparents,” Bruhn said. “And those buildings need new roofs, new air conditioning, new furniture [and more].”

Bruhn said the initial reason behind the surtax’s proposal and approval was “an immediate need” for school repairs following detailed campus reviews in 2014. The estimated cost for the repairs accumulated to about $757 million. From 2014-2020, the surtax helped account for $265 million of those repairs.

“There are still more immediate repairs and upgrades needed,” Bruhn said. “That is why the district is asking voters to extend the surtax for six more years. The public indicated that anything longer than a six-year commitment would be too long. We respect that. Over the past six years we have had 10 audits of the work done. And every audit has been a good report. We have not taken on any new debt during this time and independent agencies have found that the district has used the money responsibly.”

The effects of ending the surtax is unknown; however, the surtax’s impact on campus thus far is evident. According to Principal Rick Fleming, the current surtax allowed the school to upgrade its air-conditioning infrastructure, electrical units, technology and roofing.

“Nobody likes the word tax,” Fleming said. “Once you raise taxes, they never go back down. They continue to go up. We need quality facilities and infrastructure if we’re going to provide a good, solid, foundational education for children. We can’t do that if we’re operating in archaic buildings with leaking roofs and leaking air conditioners.”

Fleming said he empathizes with tax payers, and understands that “from the outside looking in,” the surtax is simply another tax to add. But the Independent Citizen Oversight Committee works to review the “appropriateness, and report on, projects and expenditures associated with the Nov. 4, 2014, passage of a one-half cent surtax on sales,” according to the ICOC website. This helps to promote accountability in regards to what taxpayers’ dollars are used for.

“I think the residents of Brevard County need to know that Brevard County, square miles wise, has the most acreage of any district in Florida — other than Escambia — of non-taxable land,” Fleming said. “Homeowners pay property taxes in order to fund education. So when you have a county as big as Brevard, those areas are non-taxable land and they are large swaths of land. So in essence, Brevard does not get the same tax base [as other counties].”

With Florida relying heavily on tourists for economic prosperity, the accumulated taxes from tourists are also incorporated into the surtax.

“Local taxes don’t do us justice in terms of funding our school, so we need the supplement,” Fleming said. “Plus, I think there are multiple counties around us that also have a surtax strictly to support education at a local level.”

In the event the surtax is renewed for six more years, Fleming said he hopes to achieve a one-to-one ratio for student access to devices at school. His goal is to have a laptop cart in every classroom. Additionally, Fleming said he wishes to ensure that all infrastructure is secure, and wants to work toward constructing a concession stand on campus because West Shore remains the only school in the district without one.

“We can’t just pull money out of the air to build new schools,” Fleming said. “There’s not enough tax base to do so. If we neglect [schools] and don’t upgrade them, then they’re going to fall by the wayside.”

“The role of BPS is to educate and inform,” Bruhn said. “We do not advocate for people to vote one way or another. These repairs need to be made. If voters decide not to extend the surtax, the district will have to look at other ways to pay for the repairs and upgrades.”