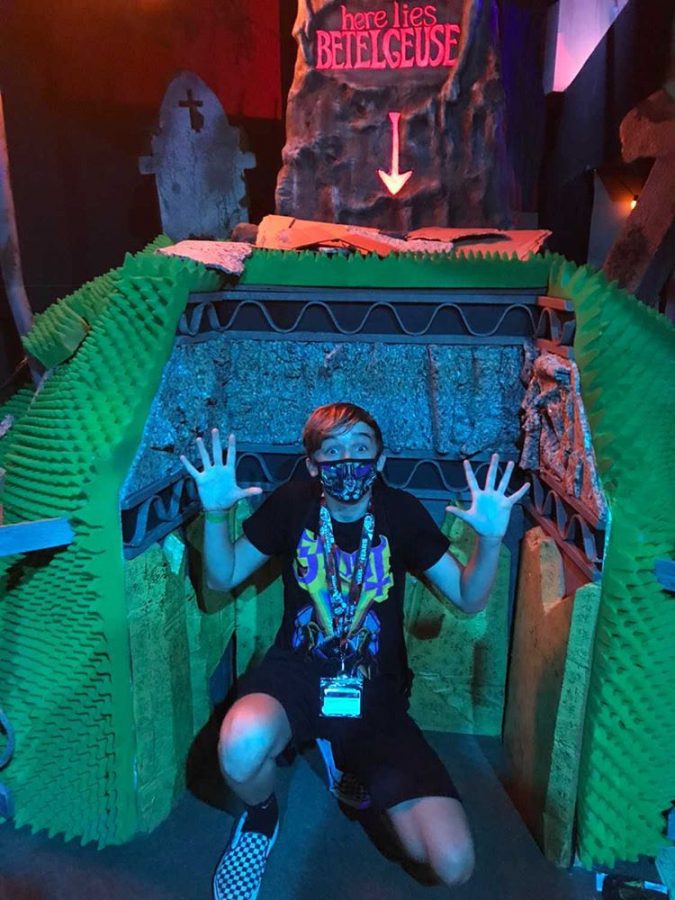 “I liked this year’s experience infinitely less than usual [because] there [were] only two mediocre houses open and the tribute store,” said Gardner. “There were no scare zones, shows, houses et cetera, which was disappointing, but was expected and necessary with the coronavirus.”

The new guidelines in the houses include plexiglass placed between the scarers and the guests at each of the spots where actors jump out.

“It definitely wasn’t as scary at all because of the plexiglass, CDC guidelines, the lack of scare zones and the other eight houses,” Gardner said. “But I think it will just mean Universal will put in even more work than normal to make 2021 the best it can be.”

Despite Gardner’s dislike of the new precautions, sophomore Grant Newcombe said some precautions made the houses scarier.

“I really enjoyed being spaced out from other parties because I think it added to the experience,” said Newcombe. “I felt as though I was more alone and separated which made it much scarier, rather than having other people take the scares in front of me so that I know what is going to happen.”

Despite the lack of houses and absence of scare zones, Newcombe said the designs were amazing.

“I loved the set and how well they accounted for COVID-19, I really couldn’t tell that it was any different,” said Newcombe. “I felt safe from the [virus] as well as feeling scared because of the monsters. I thought the set and costuming were both fantastic.”

In contrast to Newcombe’s feelings, Gardner said the The Bride of Frankenstein was the only good house of the two.

“I didn’t like Tooth Fairy nearly as much,” said Gardner. “It didn’t scare me and I was extremely underwhelmed.”

There were mixed reviews on the houses, but there were also decorations in the tribute store, where all of the Halloween Horror Nights merchandise is sold.

“I thought the decorations and the tribute store were phenomenal,” Newcombe said. “I liked that they kept with the theme of Beetlejuice and incorporated many different parts from the movie. It made up partly for [the absence of] scare zones, just because it was a new and exciting experience.”

In addition to the store’s design, the themed items for sale were a hit, according to Newcombe.

“I bought a Halloween Horror Nights mask,” Newcombe said. “I usually don’t buy merchandise, but I think that this year was so different and special that the mask would perfectly symbolize my experience,” Newcombe said.