Robotics makes it to Channel 13 with Greg Pallone 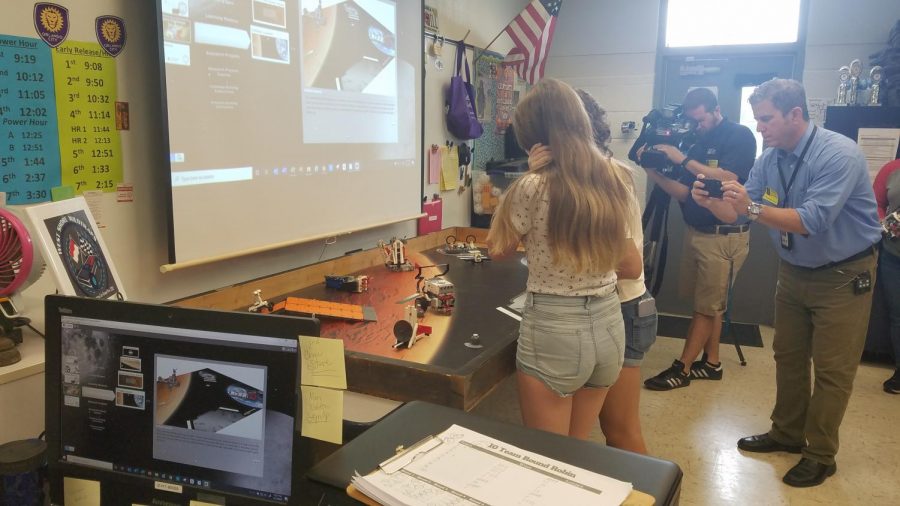 “We thought it would be a great opportunity to talk to some students about what their future careers might be and how interested they are in the Mars rover mission,” Pallone said.

Pallone’s news team was supposed to do a story on the new rover for Mars but NASA would not allow them. He turned to what he thought the next best thing: finding a school with hands-on learning about Mars. Pallone called Principal Rick Fleming and asked if West Shore had anything related to Mars.

“Fleming called me during fourth period and said can you set this up,” Whitacre said. “So that’s how the whole thing came to be. All within two hours.”

Whitacre was concerned with how she was going to pull this off.

“Number one, I was teaching,” Whitacre said. “Number two, I have to get students in here, so luckily I have a group chat with all my Whirly Girls so I thought they could come in and run their missions.”

Whitacre asked some of her students to come in during Power Hour to work on their space mission so Pallone could get footage and interview them.

“When he [Pallone] came, the camera man asked us to just pretend that they weren’t there,” Bonnie R. (8) said. “While they were filming, we worked on the space mission.”

Pallone chose to come to West Shore because it has a reputation in the county as being a STEM-based school.

“You guys are very well known as a science school,” Pallone said. “It’s important for us to talk to the students that are doing hands-on things. We thought it would be a really good way to get your thoughts on it and personalize our story. I’m excited about this, this makes me want to participate because I’m a science nerd too.”