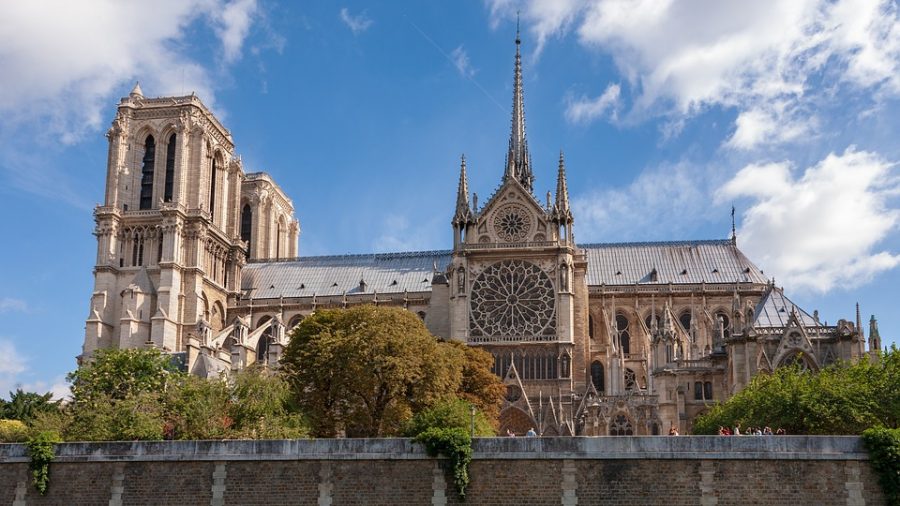 The icon cathedral, Notre Dame de Paris, faced damage on Monday after a fire spread from the attic, causing the structure’s spire to fall.

Students and staff were alerted of the fire as Monday’s events swept across the globe. Students have shared their remorse over Notre Dame’s damage, such as freshman Grace Peters, who went to the cathedral when she was two years old.

“My grandparents told me about it,” Peters said. “It was heart-wrenching. [It’s] one of the most famous structures. It’s been around for eight centuries. I know that it was incredible, all of the detail and the stained glass. It’s crazy because I’ve stood in those walls, and I watched one of the videos of the steeple falling, and it’s insane how horrible it was.”

Over the summer, a group of students had the opportunity to visit the cathedral during a trip to Paris, France, followed by Barcelona, Spain. The trip lasted from May 30 to June 5. Among these students was Junior Jamarr Cole.

“There were a lot of people [at Notre Dame],” Cole said. “There are definitely a lot of people that find it interesting. It’s a landmark that’s been there for a really long time and it has a history in the city of Paris.”

During the trip students were able to explore the cathedral and immerse themselves in its history and culture.

“It was a calming experience,” Cole said. “There wasn’t any flash photography, and they asked us to be quiet. You could walk around and look at some of the artifacts as well.”

News of Notre Dame’s damage came as a shock to students, especially those familiar with the structure.

“It’s a place that I’ve actually been to and experienced,” Cole said. “And you almost never think about what could happen if a historic landmark could be destroyed, and the impact that it could have on other people. They’re so used to it being there, especially the people who live in Paris. Some of them are used to seeing it almost every day. It was a popular place.”

French president, Emmanuel Macron, made the announcement after the fire that Notre Dame’s reconstruction will commence immediately.

French teacher, Sean Regan, who lived in Reunion Island and mainland France for seven years, said he is saddened by the cultural loss that Paris is facing.

“Notre-Dame de Paris is known as the cultural heart of France,” Regan said. “And to see such damage has crushed a lot of people emotionally in France, and those of us who lived there. And it is really quite unique – the architecture of it with all of the statutes, and the enormous stained glass windows. It’s location is really cool too because it’s on an island in the middle of a river, which is in the middle of Paris. It would be sad to actually be there and see it [now].”

“Although it won’t be exactly the same, that part of it gives me hope,” Regan said.