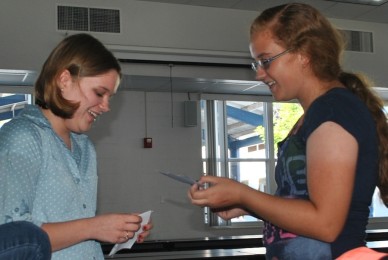 At the party, the NEHS played a Spooky Scene game and told stories of the scariest thing that’s ever happened to them.

“It was a lot of fun,” club member Rana Karycki said. “It was just so awesome that we all got together ate food and just hung out while playing games with famous quotes themed for Halloween.”

According to club sponsor Carrie Glass, there were about 20 people at the party.

“Elena Ascabal and Nick Etrick [club President] did a great job setting everything up,” Glass said. “We had activities, food, and scary music, which is just perfect for a Halloween party.”

While at the party the club members talked about their Halloween plans and ate Halloween-themed snacks.

“The Poe-try party was a great way to get into the Halloween spirit,” club member Yasemen Turkmen said. “It was nice hearing everyone’s plans and what they were going to be for Halloween.”