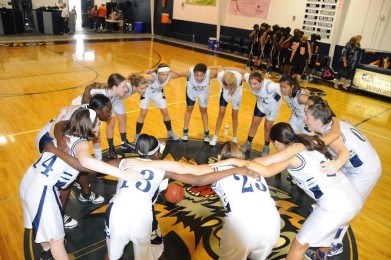 The middle-school girls’ basketball team held the Space Coast Vipers to 17 points Tuesday night and picked up its third consecutive victory. The team’s defense has been a strong point as the Lady Wildcats have held the opposing team to 5 points or less in nine of the 12 quarters they’ve played. Coach George Derr  said he also has been impressed with the improving play on the offensive side of the court.

“Offensively we are getting comfortable with plays on the low post and screens for our shooters,” he said. “We will be adding another wrinkle to the offense for the season’s second half and expect to continue to improve in our shot selection and accuracy as a team.”

Derr is also looking to the future and the team’s expectations for the rest of the season.

“We have a home game with Edgewood coming up next Tuesday before starting follow-up games at both Cocoa Beach and Cocoa to start the second half of the season,” Derr said. “I am very pleased with our development as a team and look forward to continuing to develop and refine our style of play as the season progresses.”

The next game is scheduled for Thursday at 5 p.m. at home against Edgewood.