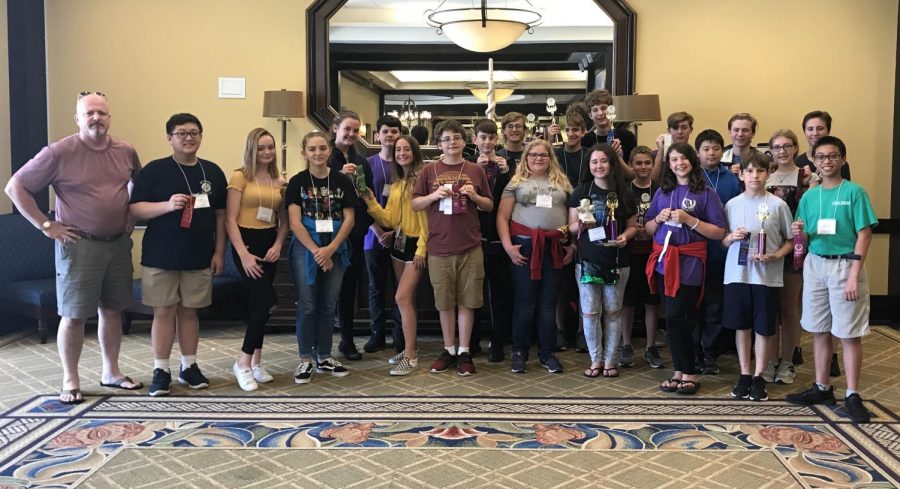 Latin team holding up awards and their class mascot NERO

A transfer student from Pineapple Cove Classical Academy, Garcia had to adjust to life at West Shore, including his Advanced level Latin class.

“The change from my old school was difficult,” Garcia said. “I had to say bye to old friends [and] the classes at this school really pushed me. [But] Latin at West Shore is so much fun. When I first came here, I felt like I didn’t fit in because I didn’t know anyone. After a few weeks, I felt like I belonged.”

Garcia said after moving to a new school, the change in curriculum is also considerable, especially in his language course.

“Here I am given more work,” Garcia said. “The Latin program here is much more challenging. It’s expected that by Latin 3 you would’ve already learned your grammar. We often translate passages, which is something we didn’t do much at my old school.”

O’Flaherty purchased a set of buzzers he puts to use in class to reflect the conditions of most Latin competitions. The students participate in a game of “Cretamina” each week.

“That gadget, which can have up to four teams of four players, cost our Latin Club approximately $650,” O’Flaherty said. “We had to purchase it, however, to recreate the conditions of the State Latin Forum Certamina. Buzzing in quickly is as much as skill set as learning the answers to all of the grammar, myth and history questions Certamen might throw at you. As they say in the Army, ‘train as you fight.’ That is, recreate the conditions of the State Forum as close to the real thing as possible. We use to raise our hands, slap desks. We did all kinds of things except using a “Jeopardy”-like buzzer system. Now that we have that, our standings have also improved. The right equipment, I guess, for the right games.”

According to Garcia, the main reason the Latin teams had so much success in competition was the hard work that each individual devoted. O’Flaherty attributes their success to the Cretamina buzzer set and having some students provide study material for the class.

“There are times [when] taking Latin when you feel discouraged, but remember that you are able to do it and you will do it,” Garcia said. “My advice … is to work hard no matter what. [Mr. O’Flaherty] is a very helpful teacher and will help you when you have trouble. I’m very proud to be part of the club.”

Having attended the State Latin Forum only once before, Garcia did not expect the team to earn as many awards but rather expected to have more time during the competition. Garcia is both secretary and historian for the Latin Club, giving him more to do.

“The experience for a novice is very confusing,” O’Flaherty said. “The event is organized chaos since there are activities going on all over the place at the location of the event. For veterans, it’s old hat, but it takes a couple of times to figure out where everything is, [like] the Certamina, the Bazaar, the Ludi Games, the Oral Competitions [and more].”

Compared to previous years, the improvement in his students has been remarkable, according to O’Flaherty.

“For starters, each year we’ve improved,” O’Flaherty said. “You have to understand that over 48 schools enter to compete. Just to place in a category is a feat unto itself. In Massachusetts, for example, it took my team from Worcester Academy 10 years to beat our rival and nemesis, Saint John’s, an all-boy school. In contrast, our West Shore students five years ago never placed, [and] now our Advanced Certamen [team] placed seventh. We’ve still a long way to go to take first prize, but we’ve come from nothing to seventh in a relatively short period of 48 months.”

“Be engaged,” O’Flaherty said. “You can’t compete if you don’t know your stuff. The other thing I would recommend and which I’m going to implement going forward is more in-class Certamen, as well as introducing students to readings about all aspects of Greco-Roman culture, from religious practices, the arts, history, geography, mythology and myriad other topics. There’s only so much a Latin teacher can do. If the students don’t step up to the plate, no amount of anything that I do will help the wins. I only mentor and coach. It’s you and your peers who prep, practice, study and play, not me.”